With lighter evenings and warmer spring weather comes baby bird season. As the days go by, you could also start to see baby birds out of their nest or on the ground, or your cat might bring one in.

Baby birds are fragile, and it’s only natural to want to help them and keep them safe. Each year, many baby birds are taken out of the wild by well-meaning people who mistakenly believe the chicks are in danger or have been abandoned when, in fact, most of these birds were still in the care of their parents.

So, if you find a baby bird, how do you know when to step in and help and when is it better to leave them in the wild? Well, this depends on the age of the chick, whether it’s in imminent danger and whether it has already been injured.

How to tell a nestling from a fledgling

As baby birds grow, it’s normal for many of them to leave their nests before they’re able to fly. A fledgling is what we call a chick who has most of their feathers and who can stand, hop, perch and flutter. You might see fledglings hopping around under bushes and chirping to their parents. The below image is a fledgling:

A nestling, on the other hand, is a baby bird who isn’t ready to leave their nest. You can recognise a nestling because they’ll have few or no feathers. They won’t yet be able to support their own bodyweight on their legs so they may rest on their tummy or chest. The below image is a nestling: 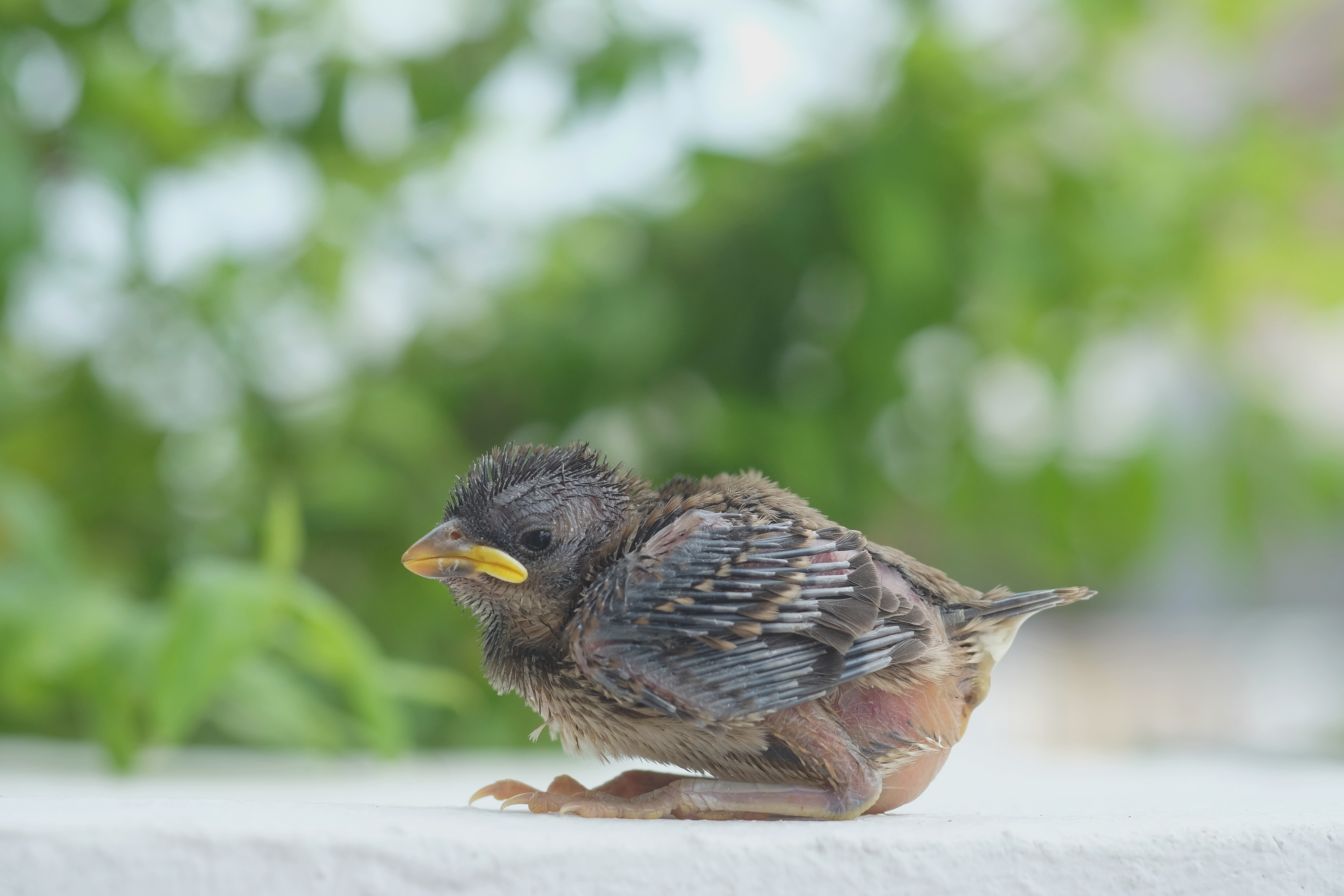 What to do with a nestling

A nestling who has fallen out of their nest needs help as they can get cold quickly, they aren’t mobile enough to move to safety and their parents will struggle to feed them while they’re separated from the other chicks. Occasionally, parent birds evict a chick if they can tell it’s unwell or dying but it may be difficult for you to know whether you’ve found a healthy nestling or not. Healthy chicks are usually active and strong, whereas unwell ones may be floppy and weak.

If you can see the nest and if you can return the chick to it without risking your own safety, that is the best thing to do. Provided the chick was healthy to start with, the parent birds are its best chance of survival. Be careful not to squeeze the chick as you handle it and only replace it if you’re sure this is the correct nest. If the chick you’ve found doesn’t look like the chicks in the nest, you might have the wrong nest and shouldn’t leave the chick in it.

Once the chick is back in the nest, you can monitor the situation from indoors but it’s important not to disturb the parent birds.

If you can’t see where the chick has fallen from or if you can’t access the nest safely, call your nearest wildlife centre for advice as it’s possible the chick will need to be hand-reared.

Sometimes, an entire nest and its occupants gets knocked out of a tree in bad weather. You can try sitting the nest in a free-draining container, such as a plant pot or takeaway pot with holes made in the bottom. Fix the whole thing to a sheltered part of the tree above at least the first branch, then replace the chicks into the nest. If the parent birds don’t come back after two hours, seek help from a wildlife centre. The chances of survival of chicks who have been out of their nest and getting cold for several hours are slim, whether their parents try to continue to rear them or whether you take them to a rehabilitator.

What to do with a fledgling

Fledglings are always best left alone unless they are in danger. Their parents won’t be far away and will be bringing food to their chick. If you find a fledgling somewhere it’s at risk of being run over or trodden on, move it gently to the closest shelter, such as under a shrub, where its parents will be able to hear its voice and continue feeding it.

If you can see your cat stalking a fledgling, bring your cat indoors and move the chick to a nearby spot where it’s less visible but where its parents will still be able to find it. Ideally, your cat needs to stay in until the baby bird can fly away, which might take a couple of days. If the cat belongs to someone you know, you could ask them whether they could shut their cat in for a short time to allow the fledgling to move to safety.

Sometimes, people worry that a baby bird has been abandoned. Handling the chick to move it to safety won’t cause the parents to abandon it as they don’t have a good sense of smell, but staying in the area after moving a fledgling could make the parent birds worried about coming back. If you can monitor the fledgling without disturbing the parent birds, for example, from indoors or from further away using binoculars, you should be able to tell whether the parent birds are still coming to feed their chick. If you have been monitoring for two hours and there has been no sign of the parent birds coming with food, contact a wildlife centre for advice.

Swifts, swallows and martins can fly as soon as they leave their nests and should never normally be helpless on the ground. So, if you find one of these, it’s best to get advice from a wildlife centre.

What to do with an injured baby bird

If you find a bird of any age who has been injured, for instance, because a cat has caught them, you’ll need to contact a wildlife centre for help.

Some wildlife centres have their own vets and some work with local vets to treat and rehabilitate wild animals and birds. They will be able to advise you whether to bring the chick directly to them or whether you should contact your vet first. It’s usually best to transport birds in a small cardboard box with a lid, into which you’ve poked some air holes, and something soft and absorbent on the bottom which won’t trap little legs, such as folded kitchen roll.

Who to contact if you find a baby bird

When to take a baby bird into captivity

Chicks have the best chance of survival if their parents rear them. Taking a baby bird out of the wild should only be done as a last resort and only on the recommendation of someone qualified to advise you. If any of the following situations apply, you will need to get in touch with a wildlife centre to find out what to do next:

From healthy diets to preventing fleas, find free and helpful pet health and training advice to care for your pet.