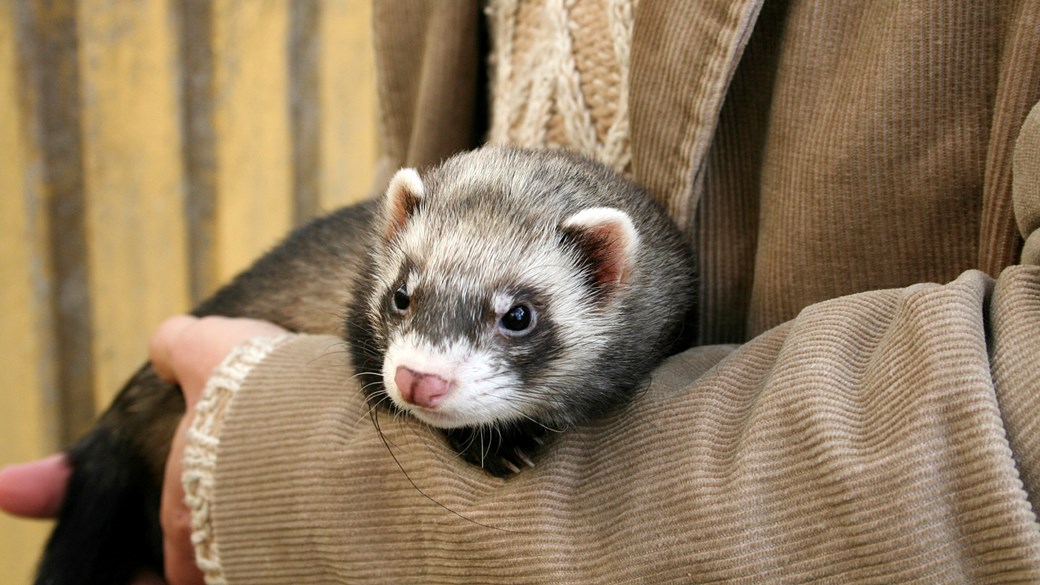 Mites And Your Ferret

Mites live on the skin of your ferret, and can make them itchy, uncomfortable and looking less than their best. Keeping your ferret mite-free will keep them feeling and looking great!

Did you know there are actually many species of mites? Small and spider-like, with four pairs of legs, mites are actually a group on their own, with the smallest examples being less than 0.1mm long! Many mites are not parasites, and can actually be really helpful, for example as decomposters.

More about mites and your ferret

Ear mites are mites that are specialised to live in our pets’ ears, and are known as Otodectes cynotis. Also commonly seen in our cats and dogs, ferrets can still quite commonly get these pesky parasites, which can cause itching and ear infections. Surprisingly, ear mites can come about about from over-cleaning of ferret ears, as this can remove the naturally protective oils found in the ear.

Ferrets that have ear mites can have a varying around of itching, dark wax from the ear, scratch marks around the ears and head shaking. It is normal for ferrets to have some dark material in their ears, so keep an eye out for this increasing in amount.

Although common, other problems such as ear infections can cause similar signs in ferrets so ear mites should always be diagnosed by your vet.  Ear mites can be transmitted between ferrets, so if you have multiple ferrets together they will likely all need appropriate treatment.

Sarcoptic mange, which is also known as scabies or fox mange, is cause by the mange mite Sarcoptic scabei.  These mites usually live on the skin of dogs and foxes although they can be transmitted to humans, and to other pets such as ferrets, if there is close enough contact.

Sarcoptic mange is highly contagious, either by mites moving when animals are in direct contact, or via sharing contaminated items such as brushes and bedding. Once the mange mites have infected a ferret, they burrow into the top layer of the skin – this is incredibly itchy, and ferrets often cause themselves damage by rubbing, chewing and licking at their skin.  You can generally see angry, red pustules on the skin, which can crust over and become infected.

In ferrets, mange seems to either target the body or the feet. When just the feet are affected, the condition is also known as ‘ferret foot rot’.

Mites are found across the UK, and ferrets can easily pick up mites from the environment, from other ferrets and from other household pets such as dogs. Bedding can also be a source of infection. While there is some seasonal variety – harvest mites for example are seen in autumn – mites are present throughout the year and exposure to mites is impossible to completely prevent.

Signs of a mite infection will alter depending on the mite in question, but there are some signs that might point to mites as a potential problem:

If your ferret is experiencing any of these signs then make an appointment with your local Vets4Pets as soon as possible.

Although ferrets can get mites, healthy ferrets in a clean environment are not at a high risk of getting mites, and infections are usually mild and easily treated. Because of this, it is rare for ferrets to require routine treatment against mites. However, there are some simple steps to help protect you ferret from mites:

Although ferrets can get mites, healthy ferrets in a clean environment are not at a high risk of getting mites, and infections are usually mild and easily treated. Because of this, it is rare for ferrets to require routine treatment against mites. However, there are some simple steps to help protect you ferret from mites:

Sadly, although mites may prefer one species over another, some will also infect humans if they are in close enough contact.  The most common of these is the sarcoptic mange mite, which is very contagious, and highly itchy.

If you think you may have been exposed to mange mites and are concerned, always contact your doctor for advice.